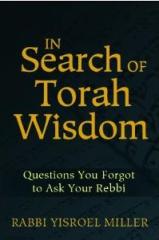 Extreme religious pluralism is spiritual chaos, even when severely limited. If you accept as equally authoritative every Orthodox rabbi, even just the giants, then you will be forced to contend with their conflicting views and attitudes through either ignorance, dissonance or harmonistic gymnastics. The best citizen of a pluralistic society knows firmly his own approach and is therefore able to sift through the incompatible views he inevitably faces. Pluralism is politeness, not surrender.

I find that this is often lost in even Charedi circles. On one side we have extremists who denounce all who disagree with their narrow path. On the other we have syncretists who blend various traditions into a distorted and inconsistent whole. Politeness, some may call it political correctness, prevents the middle ground from stating publicly that what Rabbi X said is not “my approach.” But there are exceptions.

R. Yisroel Miller’s In Search of Torah Wisdom: Questions You Forgot to Ask Your Rebbi is a refreshing example of principled pluralism. He is a Litvak, a yeshiva devotee, unafraid to state his views but also uninterested in fighting. R. Miller was a long-time student of the Lakewood yeshiva and satellite kollel before becoming a community rabbi. He does not mention any family relation but he was clearly influenced by R. Avigdor Miller, as seen in his attitudes and many specific citations.

In this book, R. Miller discusses philosophical issues of communal importance, some of the touchpoints of controversy. He neither shies away from them nor uses them as opportunities to denounce others. Instead, he eloquently explains how an intelligent person can accept Da’as Torah, reject banned books, embrace Torah over science and treat biblical figures as saints (among many other topics). His views are nuanced and defy stereotypes but they are hardly progressive.

R. Miller adopts the views of the mussar yeshiva, unsurprising given his background. He sees Torah as END_OF_DOCUMENT_TOKEN_TO_BE_REPLACED