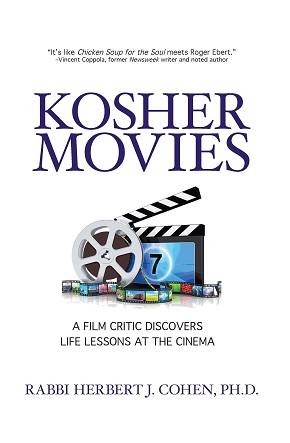 What emerges is an extraordinary story of someone truly committed to the essential elements of the Modern Orthodox ethos, tapping into the inherent tension between Torah culture and that of the surrounding world to tease out unique insights into God’s creation. Tying these carefully selected anecdotes to the motion pictures he reviews, Rabbi Cohen accomplishes the improbable: eliciting divrei Torah from what otherwise might be considered frivolous entertainment. Moreover, through his love of both Torah and film, Rabbi Cohen brings to the fore the comforting attributes that both religion and popular culture share in their inherent relatability.

Kosher Movies succeeds in promoting some ideals that in many quarters have been considered passי, namely the effective synergy of the devotion to Torah and the careful application of general, in this case, popular culture. Coming of age at Yeshiva University in the 1960s, arguably the zenith of these ideas, Rabbi Cohen rejects the contemporary notion that the Modern Orthodox approach is intrinsically flawed and does not work. On the contrary, he states that “We learn about God not only through His words but also His works.

My task as a teacher of . . . film is to give students the tools to discriminate between the wheat and chaff of secular culture.” Rabbi Cohen’s unapologetic love of both Torah and movies is evident throughout. Though the book contains the necessary caveat that one should consult movie parental advisories to determine the propriety of films in family and school settings, Kosher Movies remains a strong advocate for watching films through a specific lens of Torah.

Western society, both Jewish and secular, has taken many turns since the first feature film and the heyday of Modern Orthodox thought. In an age of abject permissiveness in secular culture and the meaningless hollowness of the trend of “Social Orthodoxy,” Kosher Movies reminds us that there are spiritual and inspirational nuggets of gold to be discovered and harnessed from the world around us as depicted in popular culture that truly complement a Torah lifestyle.

This review originally appeared in the Spring 2016 issue of Jewish Action.

A combination of movie summaries and Divrei Torah (words of Torah), this book is a lot of fun for anyone who enjoys movies and relates to Jewish principles. Connecting movies with Torah elements, Rabbi Herbert Cohen, PhD, presents a unique blend of a lifetime of movie going with Jewish learning. Cohen’s own academic background is eclectic and rich and this aides him in linking the world of movies to the world of Torah. There is a lovely anecdote in the early part of the book about the first time Rabbi Cohen heard Rabbi Joseph Soloveitchik at YU, which helps the reader to understand his life and influences. The book is divided into topic areas, which include parenting, improving yourself, growing older, adversity, relationships, sports, decisions, second chances, time, and ethics. The movies referenced include a wonderful blend of old classics and new bolder titles (e.g., Ferris Bueller’s Day Off, Rocky, 127 hours, the Hurt Locker, and Inception, to name a few). An index of movie titles is provided in the back of the book.

This book is well done, and each entry is fairly short making for a quick read. The book can be used in many ways by different groups of people. While Herbert Cohen is an Orthodox rabbi, readers will find his entries quite universal and palatable.

This review appeared in the AJL Reviews September/October 2015 issue.