Check out the cool behind the scenes images of Brian Hull’s production of Janusz Korczak’s magical story!

Script and Direction by Brian Hull

Review of The Jewish Dog

Kravitz’s canine narrator describes the events around him without understanding their full impact, offering a new perspective on the Holocaust.

With The Jewish Dog, Asher Kravitz succeeds in the difficult task of finding a new approach to a Holocaust story by telling the tale through the first-person perspective of a family pet. Kravitz treats the material with the appropriate respect while using the dog’s changes in ownership as a clever way to flesh out history and provide an additional perspective.

The story opens with the dog, Caleb, introducing himself and explaining his circumstances, as one of several puppies born in the household of a Jewish family in 1935 Germany. Kravitz drops in hints about what’s on the horizon, whether through Hitler’s voice on the radio or another dog owner bragging about his pet’s pure breeding,

Because of the real-life Nazi decree that banned Jews from owning dogs, the family has to give up Caleb, handing him over to a German with a fondness for the animal. Caleb eventually passes through several owners, who range from kind to cruel, including some involved in the worst crimes of the Nazi era. At various points in his journey, the dog is on the run with a pack of strays, being molded into a prison guard by Nazi trainers, or taking part in a prisoner uprising. At times, Caleb, whose name changes throughout his ordeal, even takes part in atrocities, following the orders of new masters. In doing so, he offers a window into the soldiers or citizens who committed similar crimes, without excusing their behavior. He is haunted by an incident when he was a puppy, when he stood by while a fellow dog hunted and killed a harmless kitten, and thinks about that experience whenever he fails to do right.

Kravitz has some fun with the dog’s food-driven motivation, and the humor does not undermine the story’s tragedy. Because Caleb’s circumstances change so often, the story maintains its suspense, as it’s never obvious which parts of history the dog will experience directly.

In 1930s Germany, an exceptionally intelligent dog is born into a Jewish family.

Caleb immediately notices that he has some inherent traits that set him apart. Not only is he unusually sensitive to humans’ emotions, he is determined to fully comprehend human speech. These talents, along with his highly developed canine skills, lead to heroism and heartbreak as he negotiates his way through World War II in Europe. All the love he knows comes from the Gottlieb family, as does his understanding of his distinctly Jewish attributes, the most important being his compulsion for survival. A Nazi decree forces the family to part with Caleb. He undergoes several name changes and increasing danger as he becomes ever more deeply involved in the war. At various times he is a stray, part of a wild pack, an SS Nazi guard and attack dog at Treblinka, and a member of an underground cell. Throughout his tribulations he yearns for reunion with the Gottlieb family. Kravitz employs harrowing, detailed imagery and fluidity of language, assuming that readers have more than a cursory knowledge of the era’s events and that they willingly accept and believe a canine narrator who hears heavenly messages from a divine being. The result is powerful and heart-wrenching, and Caleb is unforgettable. 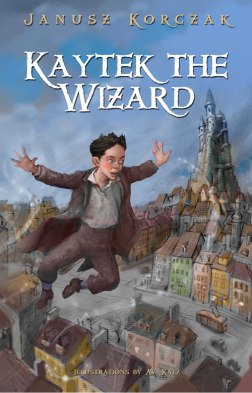 At the recent Jerusalem Book Fair, with many publishers from all over the world showcasing their new titles, it was Janusz Korczak who caught my attention.

Born in 1878, Korczak was a distinguished Polish-Jewish writer, educator and pediatrician. In 1923, he established an orphanage in Warsaw, which became well-known for his progressive ideas about child development and moral education. When the Nazis occupied Warsaw, his orphanage was moved to the ghetto, and when the Nazis later ordered that the orphanage be evacuated, Korczak chose deportation along with his children rather than saving himself. I’ve seen remarkable documentary footage of Korczak, with great dignity and kindness, marching the 200 children to the train that would take all of them to their deaths in Treblinka. Korczak was killed in August 1942.

Like Anne Frank, he left behind a diary, along with outstanding books for and about children, plays, essays and works on innovative education. His novel “King Matt the First” is a classic, telling of a boy king who tried to bring about reform.

Two of Korczak’s books are newly available, in illustrated editions, one in English and one in Hebrew.
Originally published in 1933, “Kaytek the Wizard” (Penlight Publications) is available in English for the first time. Designed to entertain and educate, this is the story of a mischievous schoolboy who discovers that he has great magical skills, but ultimately learns that with these powers come responsibility. Antonia Lloyd-James, the translator, points out in an afterword that Korczak wrote this in consultation with the orphanage children. The book is great reading for children and their parents, with illustrations by Avi Katz.

A Review of Jonah the Woodchopper

We cannot run from society forever. Jonah the Woodchopper follows a man, who when spurned by his life wholly, decides to leave society for the peace of living alone. When he seeks to rejoin society, he comes with wisdom of his deep thoughts, and Joshua Robin uses a short story narrative format to tell of Jonah’s encounters with many and what he learns and what he teaches. Jonah the Woodchopper is a riveting and insightful read, not to be overlooked.

This review first appeared in the Midwest Book Review

Review of Kaytek the Wizard by Janusz Korczak

by Nancy Horner of Bookfoolery and Babble

Kaytek the Wizard is a fantasy novel about a little boy (about age 10, as I recall) who desires to become a wizard but when he succeeds at becoming a wizard, he has trouble controlling his impulses and causes loads of trouble.

Kaytek is a precocious Polish boy. He taught himself to read and loves books but he’s a little odd and doesn’t fit in at school. Kaytek decides he wants to be a wizard and practices making things happen by saying, “I want, I demand . . . [whatever he wants].” He’s a bit of a brat so he plays a lot of pranks and causes trouble. When he tries to do good, he finds that he’s misunderstood (often blamed for trouble caused by others). Eventually, he is driven from his home in Warsaw. He cares deeply for his family so when he travels the world, he leaves behind a duplicate of himself so his parents won’t be worried.

As he travels the world, Kaytek’s ego is fed but his soul is not. He finds that what he loves more than anything is his home and family. He desires to do good but plans and follow-through have a rough time getting together. Will Kaytek ever learn how to control his impulses and restrain his powers?

What I liked about Kaytek the Wizard: