Redemption and Relevance for Today’s Jew

“Redeeming Relevance: In the Book of Deuteronomy — Explorations in Text and Meaning” (Urim Publishers, 2016) details some of the little-known themes in Devorim. The following teachings by Rabbi Nataf will hopefully motivate you to obtain and read the full text for a better understanding of what motivated Moshe in his last days of leadership of our people.Among the most gifted commentators on the Chumash in Israel today is Rabbi Francis Nataf, a longtime associate of the noted Jewish theologian and thinker, Rabbi Dr. Nathan Lopez Cardozo of Jerusalem. Recently Rabbi Nataf finished his long-awaited commentary on Devarim, the Book of Deuteronomy, which will be the focus of this week’s essay.

“Most readers are aware that the book of Devarim is significantly different from the other books of the Torah,” writes Rabbi Nataf in an introduction entitled “Moshe’s Torah.”

“For instance, words and expressions that don’t appear anywhere else in the Torah suddenly appear here. This is especially pronounced when we encounter a new word or phrase that describes the very same object or concept referred to by different terms on other books.”

Further on, the author is more specific:

“Moreover, entire stories and commandments from the four previous books are now given completely different treatments. Moshe’s new rendition of the incident of the spies that we already know from the book of Bemidbar is the most famous. Many other stories, such as the appointment of administrative judges, and to a lesser extent the actual giving of the Torah, are recounted from a new vantage point as well.

“Yet the most significant change is that Moshe generally now speaks in the first person, often telling us that “God told me…” as opposed to the more common narrative wherein we are told “God spoke to Moshe…” The most obvious reason for this is that the majority of the book of Devarim records a series of Moshe’s speeches given to the Israelites at the end of his life, a time which, significantly, coincides with the end of their journey.” 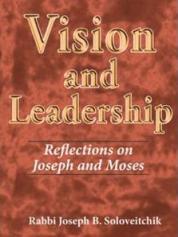 The subject of the life’s journey of Joseph, Yosef Hatzaddik, is the subject of weekly Torah readings till the end of December, which includes the festival of Chanukah.

This week’s essay focuses on the work Vision and Leadership: Reflections on Joseph and Moses [Ktav Publishing House, 2013] by Rabbi Joseph B. Soloveitchik, edited by Rabbi Reuven Ziegler, Dr. David Shatz, and Dr. Joel Wolowelsky for the Toras HaRav Foundation.

This review deals with the Rav’s take on Joseph.

According to Rabbi Reuven Ziegler, the Rav identified with Joseph, not just because they both had the same name and because Joseph was misunderstood by his siblings. Rabbi Soloveitchik identified with Joseph mainly because he was a dreamer and Joseph demonstrated, throughout his life’s experience in Egypt, that one can remain a loyal Jew even while living in the most advanced society of that era. Further, both were to spend their life’s work interacting within their respective societies at the highest levels.

Much in this work points to the Rav’s highlighting Joseph’s activities as parallel to the ultimate destiny of the Jewish people.

In the Rav’s essay, “Joseph The Dreamer” he observes: “As Jews, we have a living memory which spans centuries and millennia. We also have an awareness of a common destiny. The past is real to us; the future is also real – as real as the past. Basically, this memory of the past, together with anticipation of the future, are two experiences of brothers. And since Jews are brothers, that is what unites us: the common past and the common future.”

This common bond, when joined with trust, has forged for Jews, throughout history, the binding force that assured for us that collective strength that has guaranteed our existence through the ages.

The relationship between Joseph and Pharaoh was predicated upon the wise advice that Joseph gave the monarch that led to the continued economic integrity of the Egyptian governance. Consider the following interpretation of Joseph’s words by the Rav:“However, there is a way to avoid the distress and disaster which will be caused by the seven cows, and that is the END_OF_DOCUMENT_TOKEN_TO_BE_REPLACED