The Four Gateways of Nefesh HaChaim are introduced and discussed in Nefesh HaTzimzum, volume one. They speak respectfully of the power of human actions, speech/prayer, and thought in transforming self and world with metaphysical repercussions. Nefesh HaTzimtzum, volume two, is exclusively focused on sections of Gateway Three which discusses God’s Being (essence, existence, metaphysics) as developed in the Kabbalistic doctrine of Tzimtzum, that is, the contractions of the Infinite Being to create, penetrate, and sustain a finite universe. Doctrinal issues embrace experiential and transcendental response. Rationally, can an absolute Infinite Being be contracted to Finite Being; if God’s presence is everywhere in creation then in what way is creation an independent entity and Man’s function therein; if God as God does not contract does this embrace associated attributes, such as God’s Will and Glory, and so on. END_OF_DOCUMENT_TOKEN_TO_BE_REPLACED

Review of Nefesh HaTzimtzum in ARBA 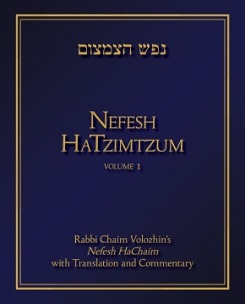 Nefesh HaTzimtzum (two volumes) provides a general yet comprehensive gateway to the teachings and world view of Rabbi Chaim Volozhin (“Volozhiner”), a leading disciple of Rabbi Elijah b. Solomon Zalman, the Gaon of Vilna, as presented in his magnum opus, Nefesh HaChaim (Vilna and Grodno, 5584 [1824]), arranged and published posthumously by his son and successor, Rabbi Yitzchak. The title’s double entendre (“soul of Chaim” and “soul of life”) speaks to the ideology of these volumes: fear of God brings life and intense love of Torah purports its sacred destiny at the highest attainable spiritual level. END_OF_DOCUMENT_TOKEN_TO_BE_REPLACED