The intent of this well-written, original, and important book is to show that there need not be any real conflict between Torah and science. While acknowledging that the Torah does not come to teach us science, it assumes that science can help us understand the Torah long before the Big Bang theory.

The book seeks to reconcile and harmonize science and Torah in order to reveal in part the secrets of creation (ma’aseh bereshit). Langer considers questions of dating the universe alongside fossil evidence and Einsteinian theories of time together with the literal reading of the six days of Creation.

The author also draws on the mystical traditions of Ramban, Midrash Rabbah, Rabbi Yisrael Lifshitz; he includes Umberto Cassuto’s encryptions of numerical coding and patterns, and he makes reference to the Zohar to show how the universe inflated from an initial nekudah ketanah (tiny point); how it became tohu(energy) and bohu (elemental particles of matter) with each transforming back and forth into the other. The fluids that would become the Earth (waters below) separated from the rest of the solar nebula (waters above).

In the process, Langer reveals the sublime, unimaginable, beautiful diversity that arose out of unity thanks to genetic mutation and natural selection. Recommended highly for academic, synagogue, and all libraries.

The four letters of the Name represent four aspects of G-d, and also four levels of spiritual growth. Just as G-d has more “outward” or revealed aspects, and more “inward” or hidden aspects, so too the Jewish spiritual path begins with basic middos and advances to more elevated middos. Interestingly, the last letter of the Name corresponds to the more outward and lower level, while the first letter of the Name corresponds to the more inward and advanced level. It turns out that the Jewish spiritual path involves following the “way of the Name” or, in Hebrew, DerechHashem. Hence, the title of the book.

END_OF_DOCUMENT_TOKEN_TO_BE_REPLACED

In “The Jewish Spiritual Path: The Way of the Name” by Rabbi Joshua Golding (Professor of Philosophy specializing in Philosophy of Religion and Jewish Philosophy at Bellarmine University in Louisville, Kentucky) combines a theoretical presentation of Kabbalistic concepts with practical guidance rooted in prayer to cultivate a deep spirituality based on the moral and mystical teachings of Judaism. “The Jewish Spiritual Path” provides both an extended commentary on prayer and an intellectually rigorous spiritual self-help book.

Exceptionally well written, organized and presented, “The Jewish Spiritual Path” is an extraordinary study that is as informed and informative as it is thoughtful and thought-provoking, making it a valued and unreservedly recommended addition to personal, rabbinical, community, and academic library Judaic Studies collections and supplemental studies lists.

…Fraenkel’s attempt to harmonize the apparently conflicting views on the tzimtzum is highly valuable. In the first place, Fraenkel’s claim is well argued and meticulously grounded in the sources, and thus deserves serious consideration. Second, Fraenkel’s reading goes against the main trend of interpretation in both the academic world of Kabbalah studies and that of Chabad historiography, which follows the last Lubavitcher Rebbe in stressing the opposition between Rabbi Schneur Zalman of Liadi and Rabbi Chaim on tzimtzum….

It is a work of both real piety and ingenious scholarship.

Fraenkel is a computer scientist by training and profession as well as an independent scholar, and it would be hard to overestimate the amount of intellectual effort, courage, precision, and diligence invested in these two volumes. Books such as this are rare, but if I may quote the words of another God-seeking Jew: “All things excellent are as difficult as they are rare.”

If God is everywhere, why can’t I see Him? 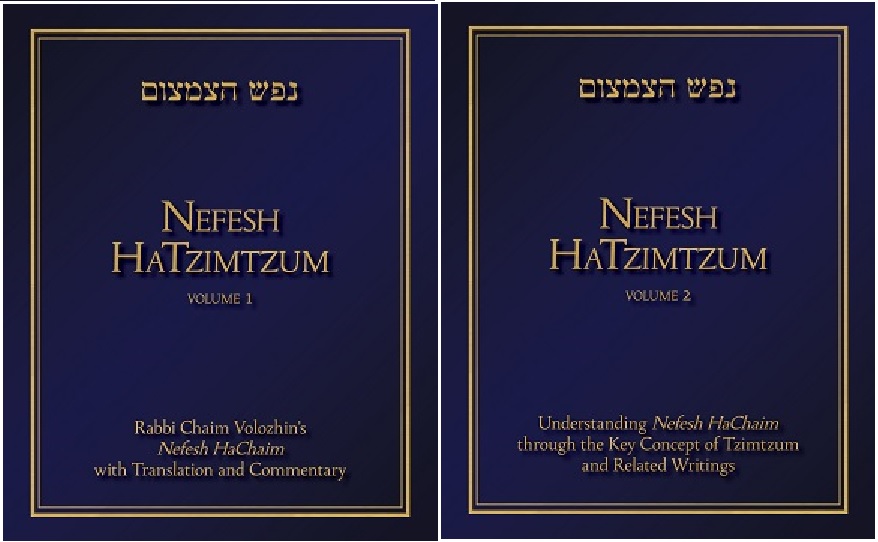 Launching his new, two-volume series, Nefesh HaTzimtzum, Avinoam Fraenkel talks about philosophical and Kabbalistic topics that have been questioned for centuries. Nefesh HaTzimtzum is a comprehensive and accessible presentation of Nefesh HaChaim, the classic book by Rabbi Chaim Volozhin, which follows a methodological framework for serving God and provides guidance on how to philosophically interact with the world. Due to its Kabbalistic subject matter, Nefesh HaChaim has lain in almost total obscurity for nearly two centuries. Avinoam Fraenkel enlightens the complex work by providing a translation, in-depth explanations, an informative historical overview, and a full index.

During his book launch in Beit Shemesh, Fraenkel touched upon Kabbalistic topics such as if Kabbalah is authentic; how Kabbalah views reality; and if Kabbalah, science, and technology are connected. You can view the entire talk here.

Nefesh HaChaim is the name of R’ Chaim Volozhin’s magnum opus – his ‘Shulchan Aruch of Hashkafa’ – whose small size does not do justice to its extraordinary depth and breadth.

Like many young men and women, I was introduced to the Nefesh HaChaim while in Yeshiva, and I recall the sense of wonderment when introduced to some of its most basic concepts. Nefesh HaChaim provides a roadmap towards living a life of spiritual exaltation, and there are parts in this work where one can catch a glimpse of the blueprint for creation. But like many of those same young men and women – and in contrast to most of my other sefarim – my copy of the Nefesh HaChaim has been opened on very few occasions since then – primarily because I did not feel confident that I had the necessary skills to grasp the depth of this great work. Like all areas of Jewish mysticism, true comprehension of the Nefesh HaChaim demands a guide – someone who has toiled in Torah study and who has pursued a life of Avodat Hashem; someone who is already using the roadmap and someone who has been able to fathom those parts of the blueprint that have been revealed to them.
END_OF_DOCUMENT_TOKEN_TO_BE_REPLACED

Volume 2: Understanding Nefesh HaChaim through the Key Concept of Tzimtzum and Related Writings

Recently there has been a spate of English translations of the classic of Mitnagdic philosophy, Nefesh ha-Hayyimby Rabbi Hayyim of Volozhin (1749-1821), eminent disciple of the Vilna Gaon. This is perhaps the most glorious—certainly the lengthiest—of the translations, one that attempts to rewrite the debate between Hasidim and Mitnagdim.