On the cover of Martin Bodek’s new book about Passover, three small pictograms set against a stark white background catch the reader’s attention: a man speaking, a sea shell and a ram.

Welcome to “The Emoji Haggadah.”

END_OF_DOCUMENT_TOKEN_TO_BE_REPLACED

An emoji can be seen as a contemporary revival of the hieroglyphics that were so prominent in ancient Egypt. And so, as we recall the flight from Mitzrayim during our third-millennium seders, what could be more appropriate than “The Emoji Haggadah” (KTAV), which tells the tale entirely in playful and inventive images? It’s the handiwork of Martin Bodek, a Brooklyn-based freelance writer and co-founder of TheKnish.com, which has been described as “a Jewish version of The Onion.”

To be sure, “The Emoji Haggadah” is more of a game than a haggadah, but it will surely engage the lively interest of younger participants and enliven the seder for everyone even if, on the other hand, the challenge of decipherment isn’t going to make your seder any shorter. But, just as the Rosetta Stone was the key to decoding Egyptian hieroglyphics, the author provides some helpful tips for translation as well as the complete text of a traditional haggadah in both Hebrew and English.

It’s the illustrated Haggadah like you’ve never seen it before, and it’s bound to cause conversation at your Seder.

Coming out just in time for Passover, author, IT specialist and language-lover Martin Bodek of Passaic, NJ has created a Hagaddah using only emojis. With certain pictograms placed together in a specific order, the reader gets the story of the Jews leaving Egypt without ever reading a word.

END_OF_DOCUMENT_TOKEN_TO_BE_REPLACED

“If you (and maybe your Gen Z kids) are looking for a challenge, this haggadah is written entirely in Emojis, down to the page number. If you’d rather decode Emojis than Hebrew, this could be fun for you. Or, it could just be a fun coffee table book.”

I recently had occasion to review the Passover Haggadah Graphic Novel, which represents a novel approach to the traditional Seder text. Almost immediately upon completing this task, another unusual take on the Haggadah was brought to my attention for potential review: Martin Bodek’s The Emoji Haggadah. If a Haggadah in graphic novel format strikes you as outside the box, rest assured that an all-emoji Haggadah not only leaves the box, it folds the box up neatly and puts it outside for collection.

END_OF_DOCUMENT_TOKEN_TO_BE_REPLACED

Peek Inside the new Emoji Haggadah!

New haggadah tells the old story, but without words.

Before you know it, it will be Passover 2019. Time for cleaning, shopping, cooking, and finding the perfect haggadah for your seder table.

END_OF_DOCUMENT_TOKEN_TO_BE_REPLACED 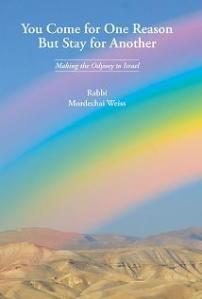 In July 2003, Rabbi Mordechai Weiss arrived at Ben-Gurion Airport near Tel Aviv with his pregnant wife, Ellie, nine of their 10 children (another was already married and living in Israel), and 40 pieces of luggage. Two vans transported them to their new house in Mitzpeh Yericho in the Judean Desert.

“As we alighted from the vans in front of our still-under-construction new home, all we could see was sand, sun, and sky,” he writes in his recently released book, “You Come for One Reason but Stay for Another” (Devora Publishing, $18.95). “It was like entering the Twilight Zone. Goodbye civilization (Teaneck, New Jersey), hello Mitzpeh.”

For more than two decades, Weiss was part of the Jewish landscape of North Jersey, as rabbi of Teaneck’s Chabad House, director of the Friends of Lubavitch of Bergen County, and chaplain of the Teaneck Volunteer Ambulance Corps. His wife taught at the Yeshiva of North Jersey and welcomed untold numbers of visitors to the Weiss home. Yet the pull of their ancestral homeland brought the large family to a unanimous decision to leave all that and resettle in a 300-family desert community.

In the book, which presents five years’ worth of e-mail updates to friends and family, Weiss provides a frank look at why the family moved; the challenges, triumphs, and tragedies of the first years in Israel; and above all, the reasons most of the family chose to stay.

Now working as a licensed tour guide, Weiss told The Jewish Standard that the notion for the book came from several people on his distribution list. He envisioned his readers as falling into two distinct groups: those familiar with the concept of aliyah, and those “who might be interested in a true and honest family experience, a personal story to be enjoyed.”

In describing his children’s adjustment, Weiss often writes about the role of sports in their lives, particularly for Mendel, who was a third-grader when they arrived.

“Because baseball was an important part of Mendel’s upbringing, it was extremely important for him to be connected to baseball here in Israel,” said Weiss, “despite the difficulties of schlepping him to Jerusalem, Petach Tikvah, and Kibbutz Gezer on a weekly basis. Baseball was important for his self-image, particularly as school was difficult, with the new language having him at a disadvantage. Baseball gave him a way to excel; he was good at it in Teaneck and he was really good at it here!”

Though Mendel made the Israeli Little League national team and played successfully in a championship game in Prague, he gradually gravitated to END_OF_DOCUMENT_TOKEN_TO_BE_REPLACED

As American Airline Flight 21 lifted off from LAX headed toward New York City, my mind filled with numbers: a 5 hour and 25 minute flight, covering 2461 miles to deliver a 2-minute speech that could determine the fate of my novel.

I had practiced on my daily walk to and from Venice High School where I teach, standing in the check-out line at Ralphs, for my wife, for my dogs, when I showered, shaved, even when I flossed.

A week earlier I incorporated these two minutes into my talk at Village Books in the Pacific Palisades at my book launch party. But that was different; there my audience was 100 friends, colleagues and students, a welcoming crowd that had feasted at a dessert/wine table prior to my performance. And still I’d been nervous.
END_OF_DOCUMENT_TOKEN_TO_BE_REPLACED

“Have you been in the army? Do you want to review this book?” the books editor asked me with skepticism in her voice, as if the burned out hulk staring at her could ever have been a soldier.

“As a matter of fact, I have,” I responded, recalling the four months of shlav bet basic training I endured many years ago, along with 100 other out-of-shape 30-year-olds. If that was the criterion for reviewing The 188th Crybaby Brigade by Joel Chasnoff, then I was up for the task.
END_OF_DOCUMENT_TOKEN_TO_BE_REPLACED