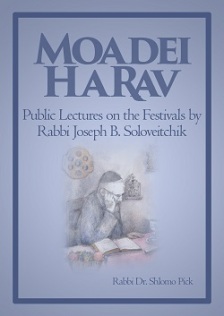 The Rav On The Holidays

There is no need to state in these pages that Rabbi Joseph B. Soloveitchik was one of the greatest Talmudists of the past few hundred years. But for English readers, there has long been a dearth of books in English that captured the depth and breadth of R’ Soloveitchik’s Talmudic genius.

In Moadei HaRav: Public Lectures on the Festivals by Rabbi Joseph B. Soloveitchik, Rabbi Dr. Shlomo Pick has written a fabulous work, based on his notes from the Rav’s shiurim. Rabbi Pick is a former student of the Rav, who now teaches Talmud and Maimonidean thought at Bar-Ilan University in Israel, and brilliantly captures the Rav’s ideas in these lectures.

The book begins with an introduction to Rav Soloveitchik’s methodology of Torah study. Rabbi Pick then writes 17 chapters on various Talmudic issues. For me, the most startling point in the introduction is that while the Rav, who studied in Berlin and was familiar with the methodologies of academic Talmud research, was fundamentally opposed to it. Rabbi Pick writes that the Rav felt that way as he thought academic Talmud both focuses on insignificant matters, and puts too much significance on the consequence of socio-historical or psychological processes.

While the subjects are often dense and abstract, Rabbi Pick is able to provide an extremely clear overview of the topics, to which he does a very good job of explaining the topics in traditional Brisker fashion.

As to the lighting of Chanukah candles, the custom, based on the Talmud, is to light “until there are no people on the street,” which is generally accepted to be about 30 minutes after sunset. In the shiur on Chanukah, the book quotes the Rav who was of the opinion that it is impossible today to say that candles should be lit at that time, since there are indeed still people on the street.

In his novel and original way of thinking, the Rav felt that in the United States the time of “until there are no people on the street” is approximately 6:30 p.m. 7:00 p.m. Since people will go out, there is another time of lighting which would be between 11:00 p.m. and midnight.

The Rav clarified that during the period of Chazal, there was only one period of time “until there are no people on the street,” as opposed to the situation today in the United States where there is a wave of people returning home after a day’s work, and then after dinner a second wave of people going out for the evening.

That is but one of scores of examples where Rabbi Pick is able to share the Rav’s insights and innovative approaches to a countless halachic topics.

This is not an easy book, given the depth of the content. But for those looking to gain a deeper understanding of the Rav’s approach to a number of different topics, Rabbi Pick has done a tremendous service bringing his notes to the English reading public.

This review originally appeared on The Jewish Press.

This entry was posted on Wednesday, October 5th, 2016 at 10:02 am and is filed under Holidays, Jewish Books, Miscellaneous, Philosophy, Review. You can follow any responses to this entry through the RSS 2.0 feed. You can leave a response, or trackback from your own site.