Review of A Girl From There 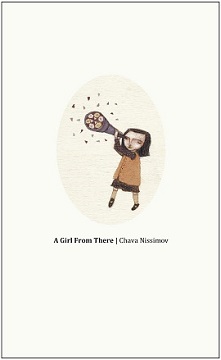 Chava Nissimov was born into wartime Poland in 1939. She escaped from a Jewish ghetto with her mother and grew up “behind the wardrobe” in various places during World War II and later as a “golah-child” on a kibbutz in Israel. Today, Chava is active in communal affairs, and she assists Holocaust survivors with reparation claims.

A Girl from There is a book of poems that documents fragmented memories of a small child’s arduous struggle to survive the Holocaust. Torn away from her parents and grandparents, alone and at the mercy of the Polish family hiding her, she recalls being hidden away into the far reaches of dark attics, claustrophobic hiding places, and cold, damp basements.

Part memoir, essay, testimony, and expressive free-verse poetry, A Girl from There is a series of delicate, fragmented, and emotional descriptions about her early life hiding from Nazi Germany and those who would gladly turn her in to the Gestapo. Each page describes the turmoil and fear of a small child who must always be hidden. She struggles with the death of her grandparents and her father; and she tries to comprehend why her mother abandons her to a Christian Polish family.

Too young to grasp her appalling situation, Chava must never be seen or heard by anyone outside of the family hiding her. She may not sleep under the stars, enjoy the caress of a warm breeze on a summer night, or feel the softness of grass under her small body. She may not speak with anyone outside of the household in which she is hidden, or leave it. Nor can she count on love from these surrogate mothers. She is at the mercy of those hiding her and in constant fear of capture by Nazis. Survival is all that matters.

The author’s disjointed childhood memories spill out in clear, animated poetic verse and are linked together, carrying the reader chronologically from Chava’s earlies memories through a dark, silent childhood filled with sickness and fear until the end of WWII. She then enters Israel as it is born out of the ashes of the Holocaust.

This review originally appeared on the NY Journal of Books.

This entry was posted on Monday, January 18th, 2016 at 5:17 am and is filed under Holocaust, Ktav, Review, Urim Publications. You can follow any responses to this entry through the RSS 2.0 feed. You can leave a response, or trackback from your own site.