Review of Encyclopedia of Jewish Values 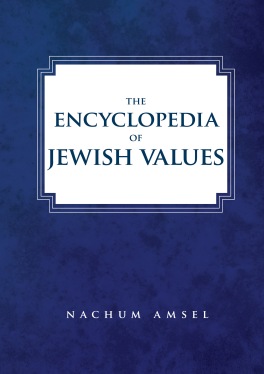 A follow-up to his widely acclaimed The Jewish Encyclopedia of Moral and Ethical Issues, this is a comprehensive reference book on Jewish ethics for contemporary times. The topics addressed in this work include Jewish attitudes toward homosexuality, stem cell medical procedures, the environment, Internet piracy, and more. Gleaning from the Bible and classic Jewish texts, as well as later authorities such as Maimonides, Nachmanides, Rashi, and the Code of Jewish Law, this work is accessible to readers of all backgrounds.

Rabbi Berel Wein says about this outstanding collection: While much attention and scholarship over the ages of Jewish history has been invested in the halachic and ritual aspects of Jewish life there is a void, and even misconceptions abound regarding the Torah’s view of ethics and societal mores. This book has come to fill that void and correct many of the errors of judgment regarding true and traditional Jewish views on many issues of society that trouble the modern world. It is well written, concise and logical in its approach and the reader will be supremely impressed by the obvious wealth of research that went into its writing and publication.

Rabbi Amsel has combined scholarship and readability, insight and factual text in this work. Modern medical and personal issues and general topics, even gun control for instance, are discussed and explained. This is a wonderful research book that can be read directly as an informative and necessary work of knowledge about Judaism and the Jewish attitudes towards the moral and ethical issues of general and Jewish society. This is a book for every Jewish home and school.”

This is an invaluable resource for educators, teachers, rabbis, and anyone who wants to enrich his fund of Jewish knowledge – a major contribution to Jewish ethical literature.

Nachum Amsel is the director of education at the Destiny Foundation and the author of The Jewish Encyclopedia of Moral and Ethical Issues.

This entry was posted on Wednesday, August 19th, 2015 at 11:45 am and is filed under Jewish Books, Review, Urim Publications. You can follow any responses to this entry through the RSS 2.0 feed. You can leave a response, or trackback from your own site.