Review of The Night That Unites Passover Haggadah Softcover Edition 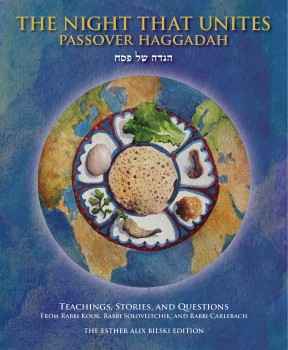 The philosophies of three major Jewish personalities lie at the heart of this Haggadah. Rabbi Abraham Isaac Kook, Rabbi Joseph B. Soloveitchik, and Rabbi Shlomo Carlebach believed that the Jewish people have a critical role to play in demonstrating and sharing a unique way of life with the world. As Jews, we share in the universal historical experience of mankind and therefore must contribute to the benefit of all humanity.

The artwork on the cover of this Haggadah depicts three concentric circles of human endeavor as uniquely taught by these spiritual giants, moving outward from the individual to the collective whole. At the center lies the importance of the individual. Each Jew is to forge his or her path and engage in a life dedicated to the ideals and mitzvot of the Torah. Second, beyond our individual concerns, we are also called on to develop and thrive as a nation. Finally, there is a third sphere which takes us beyond our individual and national concerns; we are called upon to take a unique place in inspiring the world, praying for, and working towards the Redemption of all humanity.

Offering a fresh and original look at the Seder night, this Passover Haggadah is a unique compilation of the teachings of Rav Kook, Rabbi Soloveitchik, and Reb Carlebach. Together with discussion questions and contemporary insights, this Haggadah powerfully engages the reader on the most compelling and memorable night of the year – The Night That Unites.

Rabbi Abraham Isaac Kook (1865–1935), the first Ashkenazi Chief Rabbi of pre-State Israel, is recognized as being one of the most important Jewish thinkers of all time. Living at a time when the return of Jews to the Land of Israel was becoming a new reality, Rav Kook made the Land a central point of his life and of his teachings. Rav Kook had a deep and intense love for every Jew as well as for the entire world. As a Talmudic scholar, mystic, poet, original thinker, and saintly person, Rav Kook had a profound impact on the Jewish world.

Rabbi Joseph B. Soloveitchik (1903–1993) arrived in America at a time when traditional Judaism was seen as passé and antiquated. With his profound teachings, “The Rav,” as he was affectionately known by his many students, succeeded in revealing the nobility, intellectual rigor, and relevance of the Torah, Talmud, and other sacred Jewish texts. He educated not only many rabbis, but also doctors, lawyers, and businessmen to become genuinely learned Jews. His contributions have been vital to the dynamic resurgence of Judaism in America.

Rabbi Shlomo Carlebach (1925–1994) emerged on the American scene after the Holocaust, at a time when Judaism felt outdated and heavy for many. Reb Shlomo taught the classic teachings, stories, and customs of the Hassidic world and its great masters, giving them a new language and spirit that touched the modern Jew. Reb Shlomo lovingly saw the holiness in each and every individual, believing that deep within each person is a pure soul that can never be blemished.

Aaron Goldscheider has served as a synagogue rabbi for 20 years and received his rabbinic ordination from Yeshiva University.

I fully agree with the insightful analysis of my colleague, Rabbi Jack Riemer, who writes: So this is, at least in my opinion, the best new haggadah of the year, and I recommend that you bring it to your table on seder night. It is the next best thing to having three of the giants of Jewish life sitting there with you.

This entry was posted on Sunday, March 29th, 2015 at 8:40 am and is filed under Holidays, Jewish Books, Passover, Review, Urim Publications. You can follow any responses to this entry through the RSS 2.0 feed. You can leave a response, or trackback from your own site.