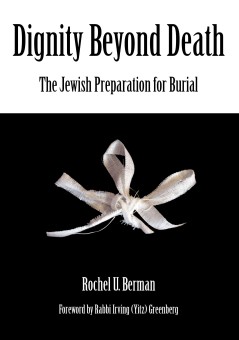 to the Torah Chevra Kadisha in Boca Raton — has embarked on a trailblazing project to develop a curriculum and study guide for Jewish high school students to learn about the Jewish preparation for burial.

Berman has partnered with Rabbi Jonathan Kroll, head of school at Weinbaum Yeshiva High School (WYHS) in Boca Raton, to introduce the eight-session course titled “The Final Journey: How Judaism Dignifies the Passage.”

The program will be launched today and will continue through March 26, highlighted by a field trip on March 16 to Levitt Weinstein Funeral Home in Coconut Creek.

Berman’s goal is to demonstrate the course at WYHS — the pilot course will be taken by 28 girls in the WYHS senior class — and then to disseminate it to Jewish high schools in all streams of Judaism throughout the English-speaking world.

Rabbi Kroll said: “I’ve been involved in Jewish education on the high school level for twenty years and this is the first time that I’ve ever dealt with this topic in a meaningful way. I believe that engaging students in the process of understanding the Jewish approach toward the end of life will lead students to live a more engaged and meaningful Jewish life.”

Berman said: “In the past 10 years, I have travelled across the country speaking in schools, synagogues and at conferences. In doing so I learned two things. One, that people know very little about this and are fascinated by what they hear, and two, that this topic is never taught in schools, and there are no teaching tools available to help educators to do this.”

Berman says this project is important because “The Jewish tradition has remarkable things to say about human dignity. However, few people are aware that this respect, and dignity continues to be expressed after an individual’s death. Our research indicates that there is little awareness of the importance of this topic among Jewish educators.

“Furthermore, there are virtually no materials available to teachers that would illuminate the humanity and ultimate dignity of the elegant path along which the Jewish deceased are taken in their final journey prior to burial,” he added.

Sessions in the course include “Placing Death in the Context of the Jewish Lifecycle,” with Rabbi Efrem Goldberg, senior rabbi of Boca Raton Synagogue; “The Work of the Chevra Kadisha as it Relates to the Core Values of Judaism,” with Rabbi Kroll; the field trip to Levitt Weinstein; “Significance of Prayers, Halacha (“Laws”) & Minhag (“Traditions”) in Tahara (“Ritual Cleaning of the Body”) with Rabbi Ben Sugerman, a WYHS teacher; “The Holocaust and Acts of Terrorism as it Relates to the work of the Chevra Kadisha” with Berman; “History of the Chevra Kadisha” with Rabbi Adam Mintz, a noted Modern Orthodox rabbi from New York City; “Halachic Issues Regarding Autopsy and Organ Donation” with Rabbi Kenneth Brander, a vice president at New York City’s Yeshiva University and rabbi emeritus at Boca Raton Synagogue; and “When Ordinary People Do Extraordinary Things” – a panel discussion moderated by Rabbi Kroll.

The content of the course will center about the role of the Chevra Kadisha, the Jewish Burial Society, as advocates of the deceased prior to burial. The study guide will include a comprehensive outline of each topic followed by activities for students such as suggested readings, written assignments and topics for discussion.

A basic tenet of Judaism is the obligation to value and serve the deceased — to extend dignity beyond death — with the collective response of the Chevra Kadisha to a death bringing dignity to the deceased and simultaneously strengthening and building a caring community.

Berman said: “The volunteers of the Chevra Kadisha quietly and privately wash, purify and dress the deceased. They simultaneously recite lyrical prayers from Psalms, thereby bearing witness to death as the last of life’s important passages.”

About the anticipated impact of the course, Berman and Rabbi Kroll hope that “teachers who may be hesitant and/or fearful will be encouraged by our demonstrated success and will have the necessary educational tools to proceed,” and “students will benefit by having ignorance, myths and misconceptions replaced with knowledge that will enhance their appreciation of this great mitzvah of Judaism.”

This project is funded in part by an anonymous donor and by the Targum Shlishi Foundation. For more information, contact Berman at rochelberman@bellsouth.net or 561-368-6731.

This article was originally published in the Florida Jewish Journal