One Rabbi’s Take on Israel 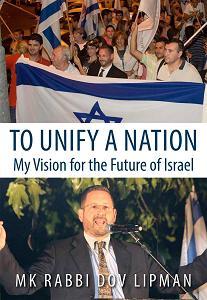 MK Rabbi Dov Lipman has an amazing story. He was raised in Silver Spring, Maryland, became a rabbi and educator, made Aliyah, and became the first American-born Knesset member in decades. Even more remarkable, he has quickly become a symbol for bridge building. In his early 40s, he represents a broad vision for what Israel could be.

His new book, To Unify a Nation: My Vision for the Future of Israel is a must read for all concerned with the future of Israel. Less than 100 pages, the book can be read in just an hour or two. Significantly, President Shimon Peres wrote the opening statement, and Yesh Atid party founder Yair Lapid wrote the Foreword.

While Lipman comes from an ultra-Orthodox background and is an Orthodox rabbi, he offers a breath of fresh air when he suggests that “polarization caused by extremism and isolationism in the religious community may be the greatest internal threat to the future of the Jewish people” (16). In fact, it was on the streets of Bet Shemesh that he emerged in Israeli leadership. Many Israelis were horrified in 2011 when an 8-year-old Modern Orthodox girl was called a “whore” and spat upon while she walked to school, allegedly because her dress was not modest enough for the ultra-Orthodox. The terrified girl said that she was “so scared…that they were going to stand and start yelling and spitting.” Rabbi Lipman stood up to protect the girls against the abuse. Rabbi Lipman also speaks out against religious coercion in Israel, seeks to build bridges between the religious and secular, advocates for the Ethiopian community and for the African refuges, seeks to transition the ultra-Orthodox into the army and workforce, advocates for vegetarianism and animal welfare, speaks out against corruption, argues for women’s rights, a pluralistic society.

Rabbi Lipman belongs to the Yesh Atid party and is a member of the Knesset. From its founding in 2012, Yesh Atid was intended to be a centrist party (to balance the merger of the rightwing Likud and Yisrael Beitenu parties). Under the leadership of Yair Lapid, it officially supports “a democratic, Jewish state,” and its platform calls for “equality under the law,” regardless of “religion, race, gender or sexual orientation.” It also would guarantee that every child be entitled to a quality education (which can be seen as a challenge to certain religious schools). In the January 2013 elections for the 120 seats of the 19th Knesset, Yesh Atid won 14.3 percent of the vote and 19 seats, second to Likud/ Yisrael Beitenu (23.3 percent and 31 seats). Since 12 parties earned enough votes to win seats, it appears inevitable that coalitions will continue to be necessary for the government to function, and it is to be hoped
that Rabbi Lipman will play a useful role in forming those coalitions.

This book is not only about Israel, though. Lipman brings in personal stories about his own childhood epiphanies and spiritual journeys and a particularly touching story about his father’s impact upon a postman.

I was very touched by something Lipman recently wrote:
“…despite the daily challenges, serving in the Knesset is a great honor. I wake up every day with energy to work hard and make a difference and go to sleep tired at night with a feeling of satisfaction at the day’s accomplishments. Every day, as the car turns the corner and I see the Knesset building in front of my eyes, I am filled with awe regarding the serious responsibility which I have accepted. I also thank God for the opportunity which has been afforded to me and I re-dedicate myself to using this role to lead our country to a better future, to generate greater unity and to sanctify His name.”

As an Orthodox rabbi myself, and one who is deeply concerned for the soul of Israel, I found myself hanging at MK Lipman’s every word. He is authentic in his religious fervor but also in his open ideology, in his love for Jewish and Israeli history but also for a radically different future, in his commitment to complex paradox but also in his clear leadership. I was especially inspired by this statement: “The time has come for all Jews to live with open Jewish pride.”

Predictably, Rabbi Lipman has been denounced by some. For example, his willingness to end the total exemption of yeshiva students from universal conscription, and his failure to condemn religious women who don (traditional male) prayer shawls or phylacteries at the Kotel, have disturbed many. His position on education has also drawn severe condemnation. At the ultra-Orthodox Ner Israel Rabbinical College in Baltimore, where Lipman studied, Rabbi Aharon Feldman denounced Lipman as a “shanah u’piresh” (apostate), allegedly betraying his Torah study by advocating for the closure of religious schools. In response, Lipman noted that he was only asking for Israel what already existed for Ner Israel:
“…as long as the yeshiva continues to teach a full array of general studies to its high school students and has a working relationship with nearby secular universities, I have a difficult time understanding how my desire for haredi high schools in Israel to teach math and English is contrary to the positions of the yeshiva and its leaders.”

Rabbi Lipman’s moderate and inclusive theology and politics remains necessary, as in March 2014 a woman was beaten in and called a prostitute by an ultra-Orthodox man in Bet Shemesh, and no one helped her when she screamed for help. Meanwhile, in much of Israel, secular and non-Orthodox Jews are angered that they must leave the country in order to get married and then return to have their marriage status validated, and were required to have their children go into the military (IDF) while ultra-Orthodox religious students (who often are unemployed and living on public welfare) were exempt from service, a policy that is only now being revised. It will require many leaders of the caliber of Rabbi Lipman to deal with the strong (and often conflicting) beliefs of people who have often recently come from a place of severe bigotry and discrimination and see Israel as their ideal home.

Rabbi Lipman has had to make sacrifices in his efforts to create a more just society. As I recently drove
Lipman to a hotel, he touched my heart when he shared how he cried when he entered the Knesset and had to renounce his U.S. citizenship. As an American and Zionist, I felt his struggle as he proudly embraced his Israeli leadership on the next level and yet still appreciated his American identity so deeply.

In any work, there are shortcomings. I longed for more details in the book. How will we get there? How
will we overcome the enormous challenges? But MK Lipman has correctly identified the problems and has demonstrated the will to tackle them. We are not experiencing a dearth of bureaucrats but of visionaries who are willing to roll up their sleeves.

In spending time with Dov Lipman, I have learned that he is not only a scholar and a visionary, he is also a mensch. I think the sky is the limit with his leadership. It would not be surprising to see him as a future Israeli prime minister and president. It is time for bold leadership and Lipman is ready to answer the call.

This article first appeared in The Jewish Press.

This entry was posted on Wednesday, July 23rd, 2014 at 9:15 am and is filed under American Jews, Israel, Jewish Books, Urim Publications. You can follow any responses to this entry through the RSS 2.0 feed. You can leave a response, or trackback from your own site.