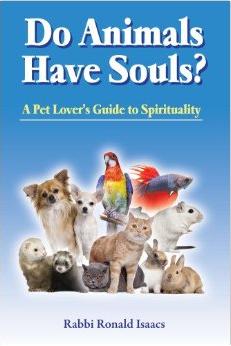 Do animals have souls?

“I think that’s a question that many people wonder about,” said Rabbi Ron Isaacs, who is a spiritual leader at Temple Sholom in Bridgewater — and the author of more than 100 books.

So he decided to write another one and address that very topic.

In “Do Animals Have Souls? A Pet Lovers Guide to Spirituality,” he answers many questions about animals, such as are dogs mentioned in the Bible; is it OK to hunt animals; can cats and dogs be blessed, and much more.

“This book is my newest and most unusual,” Isaacs said. “It’s the one I wanted to do most of my life. I have many years of personal experience as a pet owner and as a rabbi, and many people want some guidance regarding the pets in their lives.”

Isaacs said people have come to him asking for blessings for their dogs, and healing prayers and other requests. “With 160 million pet owners, I think there is a need for this kind of book.”

He has appeared as a scholar-in-residence at synagogues across the country, and he has a column called Ask the Rabbi in The Speaker, which is the Jewish Federation newspaper of Somerset, Warren and Hunterdon counties.

Isaacs also is the Jewish educator for the Jewish Community Center of Somerset, Warren and Hunterdon County’s Pirke Explorer Program. He and he and his wife have co-directed Temple Sholom’s Hebrew High School for a number of years.

He encouraged people to ask him questions through his website about pets and other issues. Isaacs also holds blessings for dogs, once a year.

His book answers questions such as whether dogs are mentioned in the Bible, and if it is OK to hunt animals for sport, and if there is an afterlife for pets. “I answer questions with my years of experience as a pet owner and a rabbi to create a resource people can use.”

He said the book is divided into parts, with part of it devoted to how animals were created from biblical times and what the Bible has to say about animals, and another part on the Jewish viewpoint of pets and pet ownership.

“I collected all the different questions I have been asked that relate to animals and pet ownership, and I answered them as honestly and truthfully as I could,” he said.

Part of the book is also devoted to questions about animals as they relate to Jewish law, with answers to questions about whether a visually impaired person can bring a Seeing Eye dog into a temple. “The answer is yes, because it’s a working animal. The person could not live a normal life without the dog, as the animal is their eyes.”

“The book is dedicated to all of our family dogs, and we have had 12 of them over the years. They were all beloved companions. I owned my first dog when I was 5, and the dog I have today is a golden retriever named Lexie, whose picture is on the book jacket,” he said.

Regarding the question, “Do Animals Have Souls?” Isaacs said to “order the book so you can find out the answer to that and many other animal questions.”

This review originally appeared in the Courier-News

This entry was posted on Sunday, November 24th, 2013 at 2:44 pm and is filed under Contemporary Jewish Issues, Ktav. You can follow any responses to this entry through the RSS 2.0 feed. You can leave a response, or trackback from your own site.