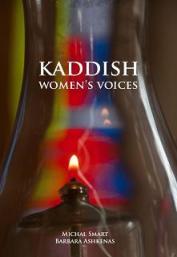 Smart and Ashkenas collected some fifty essays by articulate women of the various Jewish denominations in which they tell poignant emotional tales about relatives who died and their experiences in saying the mourner’s prayer, kaddish, what motivated them to do it, and how they felt doing so. Virtually all the stories are positive. The women derived much from saying the kaddish for eleven months. However some of the women had unfortunate contacts with Orthodox men. Some men felt that saying kaddish is a male prerogative and they mistreated the women who paid honor to deceased relatives by saying the kaddish. The book also includes three short chapters by rabbis concerning the laws of mourning and the saying of kaddish.

Many women reported feeling that saying kaddish provided them with an opportunity to engage others in helping them heal. It also facilitated them in creating new and lasting bonds of friendship in their communities. The kaddish aided them in keeping their relatives alive. It was a special time together with deceased dads, mom, kids. They had a feeling of doing something concrete and appealing. They felt they helped their love ones end their life’s journey. Some accepted the mystical idea that saying kaddish helped elevate their relatives to a higher heavenly level. They knew that the kaddish was a prayer that praised God and this gave meaning to them. Sitting in the services, many developed attachments to certain prayers and their knowledge of Judaism deepened. Some women were so moved by the kaddish that they abandoned Reform and Conservative synagogues and joined traditional Orthodox ones.

A wife of a Conservative rabbi traveled a large distance to say the kaddish, while her rabbi husband who usually attended the synagogue had to stay home to take care of the children. There were women who received offers that a synagogue official would say the kaddish in their place, they refused saying this was “the last thing I could do” for my father, mother, child.  One man was so inspired by seeing a woman saying the kaddish that he brought his teen-age daughter to meet her. Many women were the only females at services, but after a relatively short time, seeing that they came to services, other women joined them. Quite a few women felt the presence of their departed loved ones as they said kaddish.

There were women who faced questions. Should they say kaddish for a suicide (she did)? Should she say kaddish for a parent she hated (she did and the hate disappeared)? Tradition requires saying kaddish for parents for eleven months but only mandates it for thirty days for non-parents, may she say it for eleven months for her beloved son (she did)? An egalitarian woman wanted to wear a tallit and tephilin, usually only worn by men in Orthodox services (it was not allowed). Can she say kaddish for a stepfather who raised her (she could)? Many men curiously enjoy saying their prayers on Friday night in the women’s section, but would not pray there if a woman was present; may she enter and cause the many men to leave (she did and they did)? Should she say kaddish praising God when she is angry at him for taking her dad (she said it with interesting consequences)? What do you do when the men rush through the services with no appreciation of what they are saying (show them how to pray by example)?

Many women decided to say the kaddish for the eleven months despite the difficulties going to the synagogue  two or three times a day, taking care of young children – nurse, clothe, drive them to school – care for husbands, as well as a full-time job. Some refused their husbands’ offer to say the kaddish in their stead. Some had to overcome their usual habits of being tardy and disorganized.

Women were hurt by the way many Orthodox men treated them. The men were sensitive to inanimate objects such as the Sabbath bread or a prayer book, but lacked sensitivity to women choosing to pray to God with a daily service. One key point in saying kaddish is the have the congregation respond “amen” to those reciting the kaddish, but many men refused to do so. They talked loudly together when the women said the prayer to show their disapproval. They wouldn’t turn on the lights in the women’s section, and in some Orthodox synagogues closed the women’s section during the week and forced them to sit outside the sanctuary in the hall, and while she was there, they ignored her, not even saying “good morning.” One man interrupted a woman while she recited kaddish and angrily told her to leave the synagogue. Some synagogues didn’t allow a woman to say kaddish unless a man would also recite it and drown her out. When the quorum of men was just over ten, some of the men walked out before the woman could say the kaddish, so that there would be less than the number of men needed to say the prayer.  Quite a few women resented the idea that a thirteen-year old boy would be counted in the quorum of ten males needed for a service while she, who was involved in a good deed, who wanted to speak with God, was not counted.

It is worth reading this book to hear the interesting dramas women experienced and, perhaps and hopefully, it will cause men to change.

This review first appeared on BooksNThoughts