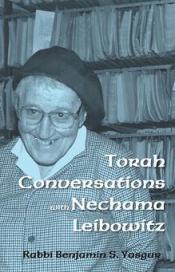 Rabbi Yasgur’s Torah Conversations adds light and a human face to the much admired biblical teacher Nechama Leibowitz (1905-1997). Yasgur, who has been Leibowitz’s student since 1972, has maintained a relationship with his teacher via personal correspondence, phone calls and visits. Professor Leibowitz has never left Israel since her arrival in 1930.

Rabbi Yasgur presents biblical discussions like “The Rule of Distant Past” (Avar Rahok), “Jacob’s Masquerade,” “The Arrival and Return of Jethro,” as well as contemporary religious-observant issues. One of the latter is the interesting “Psak from Rav Shlomo Zalman Auerbach” regarding interaction with drivers on Shabbat. Professor Leibowitz writes in Hebrew and biblical quotations are in Hebrew. The Hebrew texts are supplied with parallel translations into English. Rabbi Yasgur acquaints the readers with Professor Leibowitz’s interactive “Pedagogic Principles,” as well as “Nechama’s Self-Defined Contribution to Torah Learning.” The reader is able to investigate, in English, “A Classic Example: A Gilayon from Nechama Leibowitz on the Binding of Isaac.”

Yasgur and Leibowitz discuss teaching Humash in the Diaspora, and “Living in the Diaspora vs. Israel.” The book will interest all teachers and students of the Bible. It should be a part of Jewish High Schools, Yeshivot, Synagogues and academic libraries. Updates and revisions to the volume may be found at: http://www.ConversationswithNechama.com.

This review originally appeared in the AJL Newsletter.

A Review of Vision and Leadership: Reflections on Joseph and Moses 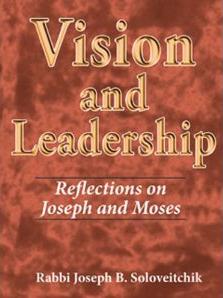 This volume is the latest in MeOtzar HoRav Series. As with all other texts by the Rav, this one was not written by him, but rather it is taken from transcriptions and edited by his students and associates. The text in this volume is very rich and deserves to be studied along with all other commentaries on Torah. The Rav’s thoughts on Joseph and Moses go far beyond what the title might suggest, bringing new and rare insights into the familiar stories that he discusses. These insights are both practical and philosophical and thus greatly enhance one’s reading of the Torah.

One example will illustrate what happens when even a single word is analyzed by this great teacher. Take the word “justice.” In his chapter entitled “Justice, Peace and Charity: Moses as Judge” we are given a thorough explanation of the difference between justitia civilis and the Jewish idea of mishpat shalom. In the former, there is a winner and a loser; one who is “right” and one who is “wrong.” In the latter, justice and charity and peace go hand in hand. There is no winner and no loser. There is a give and take on both sides. The Rav expands on these principles and lays the groundwork for END_OF_DOCUMENT_TOKEN_TO_BE_REPLACED

A Review of Wisdom of the Jews 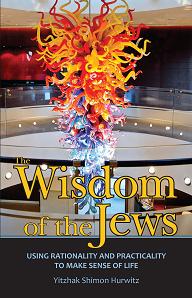 A ten-step approach is offered to prove that Judaism is “a rational system of thought that makes sense and, as such, is really not just a religion. It is a mental and intellectual engagement with life.” A chapter is dedicated to each step, which poses questions and leaves space for the reader to posit for himself. Answers to the questions are explained, and at the end of each chapter short readings from Jewish sources are included. Step Ten, based on Hurwitz’s Self beyond Self (Feldheim, 1994), provides the most fodder for thought as human emotion and behavior are analyzed.

A flow chart in one of the appendices provides a graphic depiction of how the questions and steps logically follow one another, progressing from the origins of the Universe to the purpose of the Universe, to earning benefit by doing infinite-like acts, which are, obviously, defined by the Infinite Being. Through direct and all encompassing communication from the Infinite Being, humans have received a means to go “beyond self” by doing acts defined by the Infinite Being. These acts can be categorized as intellectual, emotional and instinctual (the Threefold Key). Five appendices contain additional information about the process and the scientific proofs discussed in the text.

Rabbi Hurwitz, a beloved teacher at Aish HaTorah in Jerusalem presents what has become known as “Aish Discovery” a seminar which END_OF_DOCUMENT_TOKEN_TO_BE_REPLACED