Herod: The Man Who Had to be King

From The Canadian Jewish News: 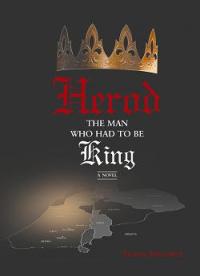 Last month, in Jerusalem, the Israel Museum opened a new exhibit of wide panoramic proportions called Herod the Great: The King’s Final Journey. The exhibition has sparked a great deal of excitement and is attracting large numbers of visitors. (Please go to cjnews.com for a story about the exhibit.)

Herod strides imperiously and brutishly through the cities and villages of Judea and, of course, in Jerusalem in the last century BCE. Historians have tried to imagine precisely who he was ever since time, wind and nature’s eternal elements buried the broken columns of his spectacular archeological masterpieces in the sand and earthy clumps of the ancient land.

And now, a new book, brings Herod to life once again, enabling us to imagine him afresh, if not actually anew.

Written by Yehuda Shulewitz, Herod: The Man Who Had to be King (Penina Press, 2012) is an ambitious work that sweeps character, drama, intrigue, history, classics and theology into one epic novel.

The novel, however, was not completed by Shulewitz. Alas, he died around this time six years ago, during Passover 2007. His wife, Malka Hillel-Shulewitz, a renowned scholar of Jewish history in her own right, completed the work that was ultimately published some five years after the author’s death.

Yehuda Shulewitz was a rare multi-disciplined scholar: economist, historian of the Roman classical age and student of archeology. His prodigious research skills are clearly evident in the book. Shulewitz was carefully meticulous about
writing into the book the actual details of Roman-Jewish history of Herod’s time.

The literary-historical focus of the book, of course, is Herod and his obsessively cruel quest to become the ruler of Judea. But Shulewitz depicts that focus with a very wide lens. He brings us the key figures of Judea, Rome, Parthia, Babylon and Egypt.

Much of western civilization owes its evolution to the seminal events of Judea during Herod’s time. Shulewitz helps us to “see” how those events might have unfolded. Herod plots against the Hasmonean rulers in Jerusalem even as the extended Hasmonean family members plot and intrigue against each other. Rome intervenes. Parthia intervenes. Egypt hovers. Blood flows frequently. Betrayal, treachery, deception, exploitation and cruelty are the political instruments of choice.

Shulewitz was not a literary stylist. His language and idiom are occasionally too modern for the plot he weaves. But nor was it his intention to write literature. Rather, he is a fastidious chronicler of historic detail, a spellbinding storyteller and a master imaginer of dialogue and homily.

Typical of Shulewitz’ imagination and erudition is the following instruction by the sage Shemaiah to a group of Shabbat worshippers in the town of Emmaus who seek his guidance regarding the brutal Romans. “If we could maintain our sovereign independence, this was undoubtedly to be preferred,” he declared in a firm voice. “Our unique way of life has not evolved on an abstract, ethereal plane divorced from the realities of life. The Torah deals with and governs every aspect of life, with relations not only between man and his Maker, but also between man and man. The Lord has sanctified us with His commandments, and in a similar vein, the Prophet Isaiah proclaimed that the Holy God is sanctified by justice. The pursuit of justice in its every aspect, enshrining the principle that man is created in the divine image, the hallowing of life – this is the quintessence of our way of life.”

Shulewitz has left us a story that far surpasses the “mere” account of Herod’s career and his rise over the horrible heap of human ruins that his ambition wrought. He tells us who the Hasmoneans were and he tells us how the Jews lived.
More importantly, he tells us how they survived. It is thus a story of love and reverence of a learned man for his people. As Shulewitz’ wife writes in the afterword, “In the ancient world, when a people were conquered it usually accepted the small gods and ways of the conquerors. Not so the Jews for whom Faith, Freedom and Justice were among the signposts that guided them along their way to accomplishing what they believed was their God-given mission – to make the world a better place for all mankind.”

Herod: The Man Who Had to be King is a highly entertaining, informative and, very often, inspiring
book. –MBD

This entry was posted on Monday, June 3rd, 2013 at 12:53 pm and is filed under Jewish Books, Jewish History, Jewish Thought, Urim Publications. You can follow any responses to this entry through the RSS 2.0 feed. You can leave a response, or trackback from your own site.