A Review of Torah Conversations with Nechama Leibowitz 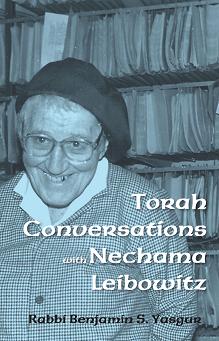 Nechama Leibowitz was an intensely private individual. In the thousands—if not tens of thousands—of classes she taught and lectures she gave in a career that spanned over sixty years, she never allowed herself to be filmed or videoed, and very rarely permitted herself to be recorded on tape. (Rabbi Yasgur reports this idiosyncrasy in detail.) I was present on occasion when Nechama expelled someone from her lecture hall for concealing a tape recorder. It is due primarily to her students and correspondents, like Rabbi Benjamin Yasgur, that we are able to glimpse the person behind the public aura.

Nechama’s public reserve sheltered an unaffected private reticence. Nechama was always Nechama: not Dr. Leibowitz (PhD from the University of Marburg, Germany), not Professor Leibowitz (of Tel Aviv University); just Nechama. Perhaps the greatest tribute to her lies not so much in the publication of previously undisclosed insights and interpretations, as in the self-evident fact that Rabbi Yasgur is as finely attuned to the Torah text as Nechama encouraged her students to be, and that he is carrying her work forward through his exemplary service with his pulpits and pupils.

Rabbi Yasgur’s book provides insights into a score of Torah texts, punctuated by the records of exchanges he had with Nechama over those interpretations—in person or via correspondence. The Torah lessons, per se, need no further approbation. Instead, I would like to elaborate an insight the book offers into the master teacher herself. In expounding on the moral of the story of God’s visit to Abraham shortly after his circumcision, Rabbi Yasgur quotes Nechama as stating that, “it is more important to offer help… than Divine revelation.”

Nothing was of greater importance to Nechama than giving—particularly of herself. This is what impelled her to visit nearly every locale in Israel to offer Torah lessons in kibbutzim, army bases, universities, and synagogues alike. It also accounts for one of her favorite aphorisms about herself—one that I heard personally many times but have not yet seen reported in any of the annals of Nechama—and I offer it here in gratitude to Rabbi Yasgur for sharing his conversations with her. In explaining her compulsion to teach, Nechama would say: “More than the calf wants to suckle, the cow wants to nurse.”

This review first appeared on  JewishBookCouncil.org

This entry was posted on Thursday, May 9th, 2013 at 12:45 pm and is filed under Jewish Books, Jewish Thought, Memoir, Urim Publications. You can follow any responses to this entry through the RSS 2.0 feed. You can leave a response, or trackback from your own site.