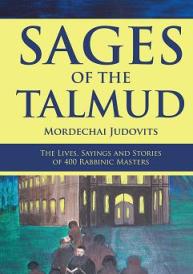 Sages of the Talmud is an encyclopedic work on 400 Talmudic sages that are found on the pages of the Talmud. The various sages are listed in alphabetical order. After the sages’ name, it is noted in which century he lived and whether he was a Tanna, Amora, Babylonian or Palestinian. The listing continues with stories and anecdotes which help the reader understand the sage’s personality and the social environment in which he lived. Their rulings, ethical teachings, and famous sayings are cited, as well. In some cases bibliographical information is also included, especially regarding the lesser-known sages.

For example, the entry on Pinhas ben Yair states:

“Rabbi Pinchas was a son-in-law of Rabbi Shimon ben Yohai and his student for many years. He lived in southern Israel, not far from Ashkelon, and was active in the mitzva of redeeming prisoners…It is said of Rabbi Pinhas that never in his life did he eat bread that was not his own…R. Pinhas b. Yair said, “Zeal leads to cleanliness, and cleanliness leads to purity. Purity leads to self-restraint, and self-restraint leads to sanctity.”

The Talmudic sources for all such stories and sayings are cited. Entries range from a single paragraph up to several pages, depending on the prominence of the sage and his frequency of appearance on the pages of the Talmud.

Most people do not know when each of the sages of the Talmud lived and what the outside world looked like at that time. Many don’t even realize that there were hundreds of years between the earliest and latest sages of the Talmud. This is true even regarding different sages who are found on the same page of Talmud! And so, what is exceptionally unique in this work is that at the end of every entry, not only are the dates when each sage lived included, but readers are directed to an appendix at the back of the book which lists the historic highlights of regional events that took place during that time. For example, at the conclusion of the entry on Rava, we are told he lived between 250 and 350 CE. Turning to the pages that discuss these years at the back of the book one will find historical tidbits such as:

• Gallus became Roman emperor in 251 and was assassinated in 253
• Valerian attempted to recover the territories lost to King Shapur of Persia, but was captured by Shapur in 259 and held captive until his death ten years later, in 269
• Aurelian was assassinated in 275
• In 325, several hundred bishops led by Constantine attended the first meeting of the council of Christian churches in Nicea
• During Constantius’s reign, two Roman generals who were active in Judea, Gallus and Ursicinus, did not respect the Jewish religion at all, demanding that the Jews supply them with fresh bread on the Sabbath and leavened bread on Passover.

Although the entries are very interesting, educational, and satisfying, in some cases a slight expansion to include additional factoids and tidbits would have made the book even more exciting. For example, the entry on Rabbi Yehoshua ben Perachia could have included some information on his relationship to Jesus and the latter’s departure from Torah observance. It would also have been a nice touch to include the folklore on Rabbi Pinchas Ben Yair’s donkey, in his entry. An alphabetical Table of Contents or Index of the sages included in the book would have been a handy addition.

Sages of the Talmud is a valuable reference book for every home. It is very useful to have a single volume in which one can look up the name of any sage and immediately learn the fundamental information about and teachings of that individual. There is also an appendix listing significant places in Babylonia and the Land of Israel and some details on the significance of these places and who lived in them. The introduction to the book includes an interesting discussion on why the sages of the Talmud had, more often than not, Babylonian names rather than traditional biblical ones, among other issues of Talmudic interest. Even those less “Talmudicly-inclined” will enjoy and appreciate the words of wisdom of our sages and their teachings. Truly a worthwhile contribution.

This review first appeared on TorahMusings.com