Heschel for a new generation 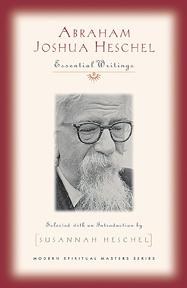 Orbis Books is a Catholic publishing house, which is now publishing a series of short books of the essential writings of the outstanding religious thinkers of the 20th century. Among those it has chosen to include in this series so far are Mahatma Ghandi, Thomas Merton, Mother Theresa, The Dalai Lama, Leo Tolstoy – and Abraham Joshua Heschel. When he died, the Catholic magazine America devoted an issue to his thought because they sensed that he was a teacher to Christians as well as to Jews.

To those who know of Heschel’s profound influence on Christian thought, his selection is obviously appropriate. But to those who know Heschel’s upbringing, the selection is mind-boggling. He grew up in the sheltered and isolated world of the Chassidic community. That someone who grew up in this world could become Judaism’s spokesman to the Vatican and its major spiritual voice to the Western World is simply astonishing.

Susannah Heschel, his daughter, has written a loving and informative introduction to Dr. Heschel’s writings that describe Heschel the parent, who could play games, enjoy Chinese Checkers, listen to classical music, and host people from many different worlds at their table on the Sabbath. And she has selected many of the most profound of her father’s writings, the ones that help to explain why, nearly 40 years after his death, he continues to be a guide to Christians as well as Jews into the meaning of the spiritual.

There is no one to this day who writes like Heschel did. His work combines philosophy and poetry, mysticism and depth theology, enormous erudition about the literature of the past and enormous passion about the task for the present, concern for the welfare of the Jewish people and concern for the welfare of the world. It is almost impossible to summarize what he said, because he expressed himself better than anyone who wants to write about him can, and therefore, most of his interpreters end up quoting from him instead of analyzing him.

He could not be easily categorized because he was, at one and the same time, deeply sensitive to the inner life and deeply involved in social causes. He taught the Biblical period, the Rabbinic Period, the Medieval Period, and the Chassidic Period of his people, and yet he was at the same time passionately involved in the civil rights movement and the struggle against the Vietnam War.

He lived in an age in which the Voice of G-d was nearly completely drowned out by the attractiveness of secularism and by the reality of evil. Those who wanted to defend religion did so by claiming that it was good for the mental health of its adherents, that it brought them peace of mind, or that it brought people together. No one but Heschel proclaimed that G-d was real – more than real – and that G-d was in search of man. No one else spoke in terms like “Man Is Not Alone,” the Sabbath as a palace in time, and a refuge from the worship of the things of space, and no one else wrote that the meaning of man’s life came from being an object of G-d, and not just a manufacturer or a consumer, a warrior or a competitor.

Whoever puts together an anthology of the writings of Heschel has to choose between gems, and therefore, she has had to disappoint those who love one pearl of his more than another, but I think that Susannah Heschel has made her choices very well. This book contains many selections that have stood, and that will continue to stand, the test of time.

This book will serve as a fine introduction to her father’s thought, not only for a new generation of Christian readers but for many Jews as well. Since this is a book addressed primarily to non-Jews as well as for Jews, she has included some of her father’s most eloquent essays on the need for religions to understand each other and to appreciate what they share with each other: the same tasks, the same sense of inadequacy, the same understanding that politics is a test of morality, and more. But she also includes many of his statements on the meaning of Judaism. My favourite is this one, until now never before published statement, which is addressed to Jews who do not appreciate their heritage:

“Let us go out to those who have gone astray and teach them to distinguish between the upper and the lower levels of life. Many people delight in their wealth and wit; let us delight in the Psalms of David as did the martyred Jews of all times. Let us adore the pioneers of prayer in an age of paganism and cruelty. Let us remember those who would never utter a lie, and those who shared their scanty meals with strangers. Many boast of the wealthy and the prominent people who come to their dinner table. Let us revere those who welcomed angels into their homes every Friday evening.”

I am sure that every devoted student of her father will have his or her own list of regrets over what had to be left out of this collection. What is important is what has been included, which is more than enough to introduce a new generation of religious seekers to a Jewish teacher who was a treasure house of the human spirit. This book contains more than enough of his thought to leave its readers yearning for more.

Rabbi Jack Riemer was a student of Dr. Heschel’s.

Original post from the Jewish Tribune online may be found here.

This entry was posted on Monday, September 19th, 2011 at 10:42 am and is filed under Book and Publishing News, Jewish Books, Jewish Thought. You can follow any responses to this entry through the RSS 2.0 feed. You can leave a response, or trackback from your own site.