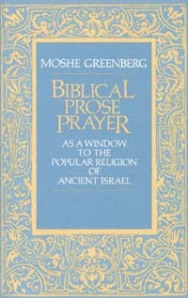 Moshe Greenberg, one of the most influential Jewish biblical scholars of the 20th century, died Saturday at his home in Jerusalem. He was 81.

Professor Greenberg, who in 1994 won the Israel Prize, that nation’s highest civilian honor, taught Bible and Jewish studies at the Hebrew University of Jerusalem from 1970 to 1996. But his teaching career began at the University of Pennsylvania in 1954 and constituted something of a breakthrough in American academia.

Before then, most American universities held that biblical study was primarily the domain of Christian scholars, said Jonathan D. Sarna, a professor of American Jewish history at Brandeis University.

“The concept was that Jews could not be objective about teaching the Bible and that they had shifted to the study of the Talmud,” Professor Sarna said, referring to the post-biblical collection of rabbinic discussions of Jewish law, ethics and customs. “So the appointment of Greenberg to teach Bible at a secular university was a milestone.”

Professor Greenberg brought to the field a willingness to take what is known as the historical-critical approach to Bible study, which assumes that more than one author had a hand in writing the first five and many other books of the Bible.

“Jews were studying it in a traditional pious way,” said Jeffrey H. Tigay, the Ellis professor of Hebrew and Semitic languages and literature at the University of Pennsylvania. The new approach, he said, “undermined the Jewish dogma of the whole Torah being given to Moses at one time.”

Professor Greenberg’s idea, which he called a holistic method, Professor Tigay said, was: “Let’s build on the idea of multiple authorship, but let’s not stop with unraveling the original components. Let’s figure out why the compilers put them together the way they did.” That method was central to Professor Greenberg’s extensive commentaries on the books of Exodus and Ezekiel, which analyzed how the multiple writers had woven their ideas into unified themes.

Professor Greenberg wrote 10 books and more than 200 articles that often combined his analysis of Hebrew with his expertise in Assyriology, the linguistic, archaeological and historical study of ancient Mesopotamia. He dissected the distinctions between the Israelites and the surrounding cultures, like the Canaanites, the Moabites and the Philistines.

In his book “Biblical Prose Prayer,” from 1983, Professor Greenberg examined every instance of people praying in the Bible and concluded that their prayers were what he called “a vehicle of humility, an expression of un-self-sufficiency.”

“Many of those who prayed in the Bible were commoners; you don’t have to be a priest in the Bible to pray,” Professor Sarna said. “Greenberg shows how the biblical concepts influenced the subsequent history of Jewish prayer, that Jews don’t need an intermediary.”

Professor Tigay added: “He reasoned that the frequency of spontaneous prayer must have sustained a constant sense of God’s presence and strengthened the egalitarian tendency of Israelite religion, which led to the establishment of the synagogue.”

Born in Philadelphia on July 10, 1928, Moshe Greenberg was one of two sons of Simon and Betty Greenberg. His father, a rabbi, later became vice chancellor of the Jewish Theological Seminary of America in New York.

In addition to his son Joel, a former reporter in the Jerusalem bureau of The New York Times, Professor Greenberg is survived by his wife of 61 years, the former Evelyn Gelber; two other sons, Rafi and Ethan; his brother, Daniel; and nine grandchildren.

Professor Greenberg graduated from the University of Pennsylvania in 1949, received his doctorate there in 1954 and was immediately hired to teach there. While at Penn he had also studied at the Jewish Theological Seminary. Although ordained as a rabbi, he never led a congregation.

In 1970, Professor Greenberg emigrated to Israel and began his 26-year tenure at the Hebrew University. With the shift from Talmudic analysis by scholars in the nations of the Diaspora, he was convinced that Israel was becoming the focus of Jewish biblical study.

“Greenberg was central to a group of scholars that rescued the Bible as a subject of study by Jews,” Professor Sarna said.

From The New York Times

The original text of the article may be found here.

This entry was posted on Monday, May 24th, 2010 at 9:00 am and is filed under Obituaries. You can follow any responses to this entry through the RSS 2.0 feed. You can leave a response, or trackback from your own site.