Children’s Books About Passover from the Jewish ValuesFinder 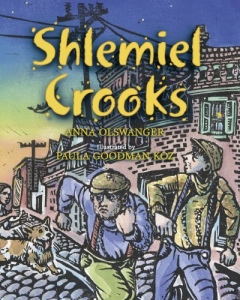 Colorful, cartoon-like pictures and a humorous rhyming text tell the story of Passover and the Ten Plagues through the use of five roles: the Narrator, Moses, Pharaoh, the Egyptians and the Chorus. Each role is printed in a different color, so the story could be acted out as Readers Theater at Seders, and could also be used in classroom or library presentations.

Young Nachshon is known among his fellow Hebrew slaves as brave about everything except water. When Moses confronts Pharaoh and then leads the Jews out of Egypt, Nachshon overcomes his fear of water and is the first to walk into the Red Sea. This story about courage is illustrated handsomely in rich, glowing colors and with angular shapes that evoke a desert setting.

Bryna Fireside has transformed a true account of a Seder held by Union soldiers during the Civil War into an easy-reading and appealing story in which three former slaves who are also soldiers in the Ohio 23rd join the twenty-one Jewish soldiers and their commander, William S. Rosecrans, in preparing for and then celebrating their Seder. As the preparations ensue and the Seder begins, Passover’s blessings, symbols, and meaning are extended to include the experiences of the African-American soldiers and their hope for freedom. Attractive, heavily-textured, full-color paintings adorn the story, written in a light, lively style and divided into short chapters.

This Yiddish-inflected Passover version of the Little Red Hen nursery tale couldn’t be more fun! Those no-goodniks sheep, horse, and dog don’t have a moment to spare for their friend, Little Red Hen, as she goes about first growing the wheat, then grinding it, and then baking it into matzah for her Seder. When all three have the chutzpah to show up for the Seder, she remembers the words in the Haggadah: “Let all who are hungry come and eat,” and invites them in. And when it’s time for clean-up afterwards, guess who says, “Not I” this time. The combination of a rollicking story, bouncy illustrations, and the take-off on a tale most children have likely heard before make this a winner! Instructions for preparing and baking matzah are given.

A little girl describes the two Seders she goes to each year after her parents have divorced. While expressing both wistfulness and her wish for her parents to get back together, the story’s positive perspective is strong. At each Seder, she comments on the charoset and at the conclusion, her mother compares families to charoset – some sweeter than others, some stickier, but each tasty in its own way. Four charoset recipes follow the story, which is colorfully illustrated.

The Civil War has just ended and Corporal Levy of the Union Army finds a Jewish family in Richmond, Virginia who invite him to their Seder. Having a Yankee at the Seder is shocking to the family’s young son but the traditional injunction “Let all who are hungry come and eat” trumps political differences. Written with touches of humor and warmly illustrated, the story is rich in Jewish values such as peoplehood and hospitality. Like Krensky’s Hanukkah at Valley Forge, it is based on “hearsay” history which may or may not have actually happened.

Superlative in conception, design, and content, this Passover book captures both the meaning and the observance of the holiday in the present (now) and at the time of its origins (then). The text is direct and sparse, the folk-art illustrations are expansive and captivating, many spread across fold-out pages that very creatively link Passover’s contemporary and historical aspects. As a modern family prepares for Passover and then celebrates it at their Seder, each element of the Seder is connected to the Passover narrative at a level of written and visual clarity that is perfect for children of many ages, especially younger ones.

Consider this a classic for Jewish children. It is timeless in its appeal and still popular with both children and adults. The plot, the writing style, and the evocation of an earlier time when gefilte fish were made and not bought are all heartwarming. So, too, are the illustrations which capture not just the two children’s well-meant attempts to keep a carp that they name Joe, after a deceased neighbor, from the cooking pot but also the characters’ love and respect for one another. Set shortly before Passover during the Depression, this highlights one food custom but does not explain the holiday.

A sequel to Molly’s Pilgrim, this shows Molly learning to reconcile Jewish and American traditions when a classmate’s birthday party occurs during Passover. Once again, Molly’s resourceful mother comes to the rescue. As in the earlier book, this is a sensitive portrayal of children’s relationships with classmates.

Photos of toddlers are matched with a concept related to Passover and with some additional photos of the objects associated with the concept. For example, the first double-page spread says: “Pesach is here. What do you see? A house so clean! How can that be?” The child is dressed in denim work clothes and objects used to clean the house are shown opposite her: a vacuum cleaner, sponge, broom, paper towels, pail, and mop. The book’s other concepts are food, the Seder table, drinks, clothes, the Haggadah, and the hidden afikomen. The children adorning each one are too adorable for words alone to do justice. Virtually all of the very simple text is in English except for the words kosos (cups), kos shel Eliyahu (Elijah’s cup), Seder, Hagaddah, and afikomen. However, because there is no glossary to explain these terms, this board book may have limited use. The photographs, in color, are bright, clear, and labeled.

A cogent text, lively illustrations, and flaps to lift are the three notable features of this third book on which Hanft and Chwast have collaborated. It tells the story of the Exodus, contrasting the dignified figure of Moses with the rather effete one of Pharaoh, and concludes with scenes of two Seders, one from times past and one of today, complete with a Seder plate whose foods are discovered by lifting flaps. Chwast’s illustrations are deceptively simple because they convey so much meaning so economically. The colors are muted but the palette is varied so that there is much to look at on every page. As in The Miracles of Hanukkah, the text follows the Bible without fictional details being added.

Another excellent book in the Holidays Around the World series, this is by the same author as Celebrate Hanukkah with Lights, Latkes, and Dreidels and follows the same format. Engaging color photos of Jews observing Passover in different parts of the world accompany a concise text that conveys the meaning and history of the holiday, its customs, and the observance of the Seder. Appended is more information about Passover, a recipe, and some recommended books and websites. Rabbi Shira Stern’s discussion of Passover concludes the book.

The traditional order of the Seder is the organizing principle of this superbly written and illustrated anthology. The lucid narrative blends history, tradition, modern practices, and Passover’s timeless meaning. It is extended by a fascinating selection of poetry, stories, and song lyrics, including a K’tonton tale and another about a protest rally on behalf of Soviet Jewry. The illustrations and book design are outstanding and draw from centuries of Haggadot, manuscripts, ritual objects, sculpture and paintings. A distinguished book for a wide range of interests and ages. Winner of a National Jewish Book Award.

Passover customs of Jews from different parts of the world are introduced to children in this brightly illustrated, well-designed book. Gibraltar, Turkey, Ethiopia, India, Israel, Iran, Morocco, and the United States are the countries whose customs are used to show each step of the Seder unfolding. A map and brief historical information about each place is also provided, along with recipes. Whereas Heiligman’s book Celebrate Passover with Maror, Matzah, and Memories focused on the meaning and rituals of Passover, this book focuses on national customs. There are few books for children about Jewish customs and practices in places other than Anglophone countries so this is welcome.

This off-beat and funny story, set in St. Louis in the early 1900’s, is based on the author’s grandfather. It involves the attempted robbery of Reb Olschwanger’s saloon by two shlemiel crooks who are instigated by the ghost of Pharaoh and foiled by a talking horse and a neighborhood “shtuss.” Flavored heavily with a Yiddish inflected narration and illustrated with earthy, heavily outlined linocuts, this gem of a story requires considerable practice before reading aloud. And it’s worth the effort.

Beginning with a brief overview of Passover, the remainder of the book follows the traditional Passover Haggadah in abbreviated form. It is written in style that young children will understand and enhanced by clever songs that are adapted from familiar ones like “Old Macdonald Had a Farm.” The illustrations are slightly less abstract than in the other Sammy Spider books and Sammy himself appears only peripherally.

Organized in relation to the Seder, this is filled with information, stories, crafts, games, recipes and songs. A drab, black and white format is offset by lively, informal writing, photographs of Jewish children, and a haimish attitude on the authors’ part.

In another take-off on the Gingerbread Boy, the matzo ball boy careens through the village, evading the bubbe who created him, the yenta, the rabbi, and a sly fox with a “voice as smooth as schmaltz,” but not a poor man and his wife who invite him to their Seder, where he winds up in the soup! The illustrations by Rosanne Litzinger, who also illustrated the Sydney Taylor Award winning picture book, Chicken Soup By Heart, are rich and delicious – but they don’t quite match the text in their depiction of the matzo ball boy. The use of Yiddish is a little contrived, as well. On the other hand, a group of K – Gr. 2 children to whom the story was read found it hilarious!

From the AJL blog.

The original text of the article may be found here.

This entry was posted on Tuesday, March 16th, 2010 at 3:05 pm and is filed under Children's Books, Passover. You can follow any responses to this entry through the RSS 2.0 feed. You can leave a response, or trackback from your own site.