Was Nehama Leibowitz A Feminist? 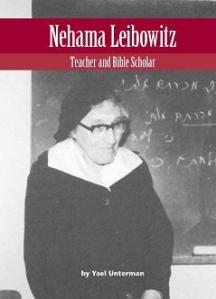 The recent biography by Yael Unterman, Nehama Leibowitz: Teacher and Bible Scholar is fascinating, exhaustive and thought-provoking. The book is divided into three parts: Nehama’s life, her beliefs and her methodology. In each section, Unterman provides extensive background and then takes you through the subject with copious references to published materials and the seemingly endless interviews that she conducted. If anything, you can say that the book was too researched because there are so many people quoted with stories and facts. I particularly liked that aspect – the many stories and interviews – because it really brought Nehama to life. On her own, she was very modest and did not give away too much about herself. However, through extensive research, Unterman was able to put together the bits and pieces Nehama had told to students over the years, often accompanied with a story about how the information was revealed.

The book raises many interesting questions about Nehama (that’s what she liked to be called), and I don’t think one blog post will suffice. This is the first in a series of planned posts on issues raised in the book.

Chapter 14 is titled: Feminism and Feminity: “A Woman in the Inner Courtyard?”

The main question discussed is Nehama’s relationship with feminism. On the one hand, she was a female Torah teacher long before they became common, as they now are in some communities. And she was such a unique educator with only one agenda – to teach Torah – that she broke through most barriers. In that sense, she was a feminist.

But her agenda was solely in regard to teaching Torah. She believed that she had something to teach and she was going to teach it. Other than that, though, she was entirely traditional. She was dead set against any type of religious innovation and often debated her students about this, some of whom devoted their lives to feminism — like Blu Greenberg and Prof. Tamar Ross. Students like Greenberg and Prof. Chana Safrai tried to convince Nehama, but Nehama consistently rebutted their advances. One time, R. Avi Weiss (not a student) visited her and gave her a copy of his book advocating women’s prayer groups. Nehama responded with a letter opposing the innovation (anyone have a copy of the letter?).

In keeping only those mitzvot customary for women, Nehama did not feel deprived in any way. She viewed the desire to take on more mitzvot as a mdoern innovation resulting not from authentic religious emotion but from the influence of secular feminism. She was very outspoken on this issue. Had women fulfilled all their present obligations that they needed to go pursue some more? Had they run the gamut of charitable deeds? If God did not want women to lay tefillin then they should not — what need had they for a black box on their heads? Whoever wanted more devotion every morning should get up early and visit the sick.

She also repeatedly expressed the idea that raising children is more important than anything else and that she would have given up all of her accomplishments for a child of her own: “Nehama said explicitly she would have given it all up for a child. In response to a disparaging comment regarding women who choose children over career, she retorted, ‘Do you think I’d be writing these gilyonot if I had children?!’” (pp. 284–285)

I think in some respects Nehama was a feminist, but in the sense that nowadays almost everyone is. Some feminist attitudes have become so mainstream that they are almost not noticed. Concepts like “equal pay for equal work” are also feminist ideas, and Nehama embraced them just like almost all of us embrace them. However, the ideas that are currently associated with feminism are those that she rejected.

The original text of the review may be found here.

This entry was posted on Sunday, January 31st, 2010 at 10:00 am and is filed under Biographies, Women and Judaism. You can follow any responses to this entry through the RSS 2.0 feed. You can leave a response, or trackback from your own site.